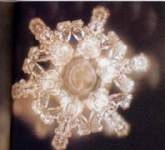 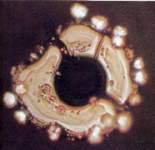 Springwater                  Polluted Lake
These images were photographed by Emoto and reflect water’s ability to retain a memory of a past experience, be it pollution or a negative or positive emotion.
(Copyright and not used to sell any product, but only to promote Masaro Emoto’s work)

THE MESSAGE OF WATER .

Masaru Emoto / by Hansruedi Obi, Zurich, documented in his book “The Message of Water”, after 12 years of research, with absolute scientific proof that water has the capacity to store not only information, but also feelings and consciousness.

Over three years he photographed thousands of water crystals and analysed the results. He came to the conclusion that at minus 5 degrees centigrade the optimal conditions were given to show the crystal forms of water through a microscope kept at this cool temperature. Good water forms crystals based on the hexagonal pattern, similar to snowflakes. Added to these basic hexagonal patterns are crystalline embellishments. From this arrangement, together with the colour of the crystals and the structure of it’s centre, stored information can be deciphered and interpreted. In 1984 Dr. Lee H. Lorensen, Biochemist in the U.S.A, was the first researcher to investigate clustered water, in 1986 he met up with Japanese Masaru Emoto, who was very interested in his work, and after having returned to Japan, took 10,000 photos of water samples from the rivers of Japan and all over the world. He then hit upon the idea to play music classical or modern to the water and to photograph the effect. The results were incredible. He imprinted verbal messages to the water, such as: ‘good’ ‘evil’ ‘love’ hate’ devil’ ‘angel’ ‘Adolf Hitler’ ‘Mother Teresa’, and noted the corresponding changes in the structure of the water. He placed a glass of neutral distilled water on a photo of a laughing young girl. Then he exposed a water filled with reagent tube with these descriptions and obtained the same type of photo.

Water is the source of all life, if contaminated, the life of every ‘creature’ is jeopardised. Can water survive on this earth?

Water after an earthquake

On January 17th 1995, the huge Hanshin-Avaji earthquake took place at Kobe. Three days later, pictures were taken from crystals from water pipes. It seemed that the crystals had captured the fear, panic, and suffering that the people had experienced immediately after the earthquake. The crystals were totally destroyed, it was a accurate reflection of what the people had gone through. Three months later, more water samples were collected from the pipelines. Help and sympathy had flooded in for the people in Kobe from all over the world. Although the rubble was piled up, the people were able to restore their environment by the friendliness and warmth of others. It seemed as if the crystals had also captured these sentiments. This book, “the Message of Water” in Japanese with English translation is available for DM48, from Ehlers Verlag GmbH, Geltlinger Str, 14e, 82515, Wolfratshausen, Germany. Tel. 08171/4184-61 and fax 08171/4184-66

Can that be why the human body retains memory at an emotional level of past events, not because of brain memory, but from the water surrounding every electrical cell (trillions) of the body? It has been proven that a foetus can retain memory of events that took place outside the womb, in the vicinity of the pregnant mother, even before the brain was developed in the child, as this information could be recalled by the child in later years. Have we misunderstood the very nature of water, and it’s importance in our world today?