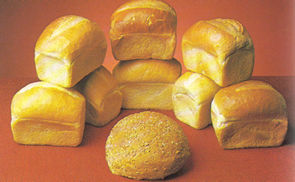 Eight loves of white bread would have same effect for increasing stool output as one wholemeal.

Although wholemeal bread has three times the amount of dietary fibre compared to white bread, it’s effect on bowel behaviour and content is even greater than this, and weight for weight, it is eight times more effective than white bread in treating constipation and it’s consequences.
Real home milled flour contains 100% of the wheat grain after removal of the husk.

White flour contains a little over 70% of the grain – the remainder, containing most of the fibre and mineral and vitamin content, having been removed during the milling which equates to eight loaves of white bread being to one wholemeal.

The flour used in most commercial brown breads, though less refined than white, still has most of it’s fibre extracted.
The bread may be called ‘wheatmeal’.
The fibre content of this varies greatly with the baker, but will be often halfway between wholemeal and whitebread.
The richest of all sources of cereal fibre is wheat bran composed of the outer layers of the wheat which are removed in the preparation of white bread flour.

The important question is: Can we rely on commercial bread to cater for the daily bulk and nutritional needs of our body?
The logical conclusion can only be, purchase your very own gain mill to extract the highest quality flour, which then retains this high quality for up to 3 days after processing, the quality will gradually decrease after that, as well as taste changes.